Books are Shipping this week!

Thank you to everyone who pre-ordered a copy of 10/31 vol. 5, they are to begin shipping out on Wednesday of this week, and will probably take about a week in total to get all the sketches done and have them all mailed out.

This book is also now available as a softcover and a hardcover at Blurb as well here.

I am also working on a rework of my main website as it needs massive updating. I hope that will be ready by February.

Happy New Year to all!
Posted by Shiverbones at 1:45 PM 1 comment: 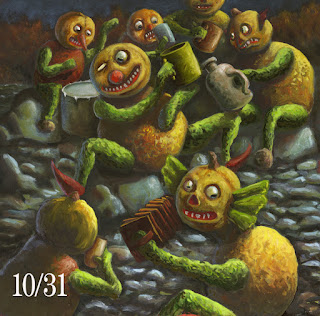 The Newest volume of my series of Halloween art books is coming soon. I added the 2 different limited edition versions of the book to my Big Cartel store as pre orders. As with previous volumes, there is a premium edition which contains an exclusive postcard and a hand drawn sketch inside. This is limited to 20 copies. There is also a version limited to 30 copies which also has a hand drawn sketch inside, but no postcard. All 50 copies are signed & numbered. I am expecting to begin shipping these in late November. The regular versions will be available through Blurb when they are completed.
Posted by Shiverbones at 12:50 PM 1 comment:

New paintings and some bad news

Bad News first, I have had to drop out of the Ghoultide Gathering show this October. My schedule has been so tight I was unable to get any work done for the show. I am disappointed that I won't be able to see many of you and hope you won't be too let down by my need to withdraw.

Here are three paintings that will be part of Subtext Galleries "Ghosts of Halloweens Past" show opening 10/12 in San Diego.

Tormentors In a World of Blue 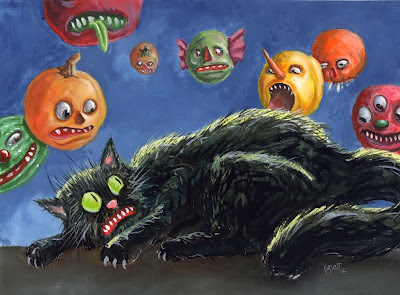 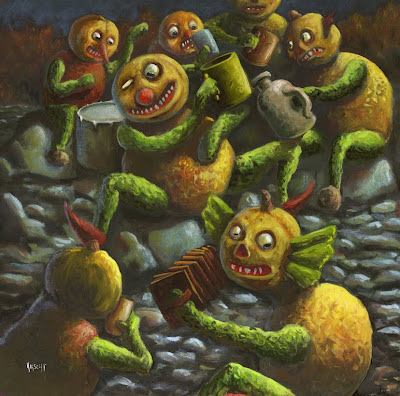 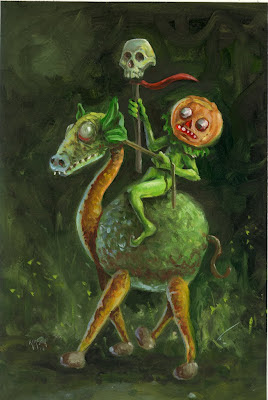 As autumn approaches I am doing my best to create as much new Halloween imagery as possible. This week I am offering a wood cut print inspired by Spook Show posters and a new hand painted Halloween postcard on ebay. I am also planning to release Volume 5 of my series of Halloween art books "10/31" late this September. For now, the new imagery... 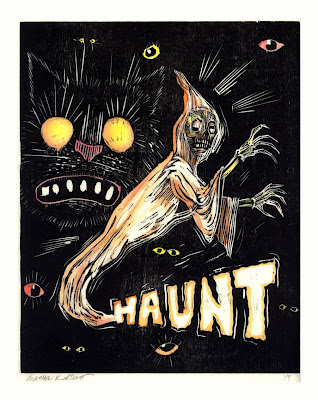 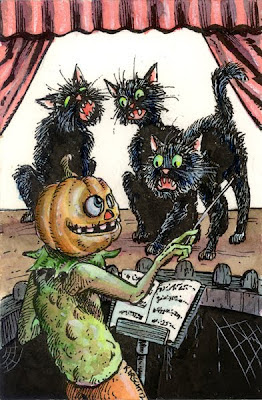 I contributed 6 paintings to the newest series of Wacky Packages stickers available now in places like Target, Wal-Mart, Toy's r Us and more. These are the 6 stickers... 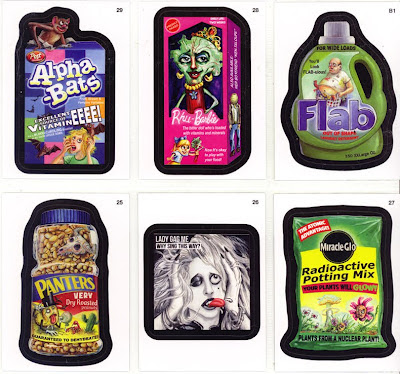 Here are some original paintings used to make the Stickers... 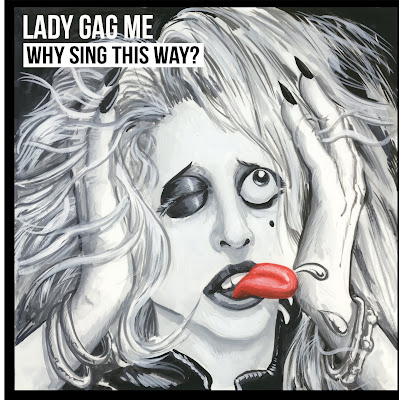 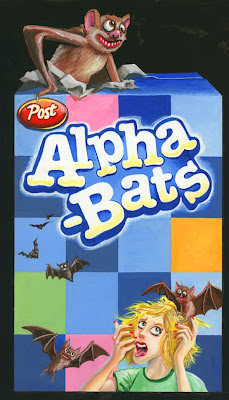 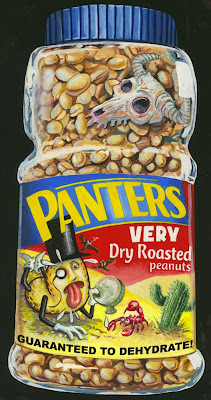 and lastly some of my sketch cards for the set. 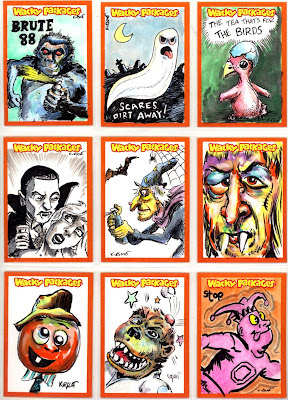 A friend recently asked me to do a small painting in my "candy Land" style. I hadn't done a piece like this in over 2 years, but decoded to go for it, and it actually turned out to be fun to do. I certainly think the next one will be a lot bigger than 5" x 7" like this one, as it's size was the only thing holding me back. The painting is titled "Red Handed" 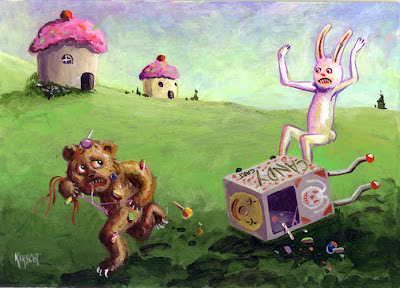 Also this week, I have started doing my return sketches for Cereal Killers 2, and here are 2 of the 6. 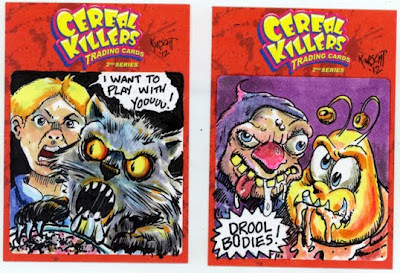 Now off for a little relaxation and vacation. Woot!
Posted by Shiverbones at 7:10 PM No comments:

If you may have noticed a drop in my Halloween art production over the last few months, it's because of sketch cards. There is yet 1 more set I worked on I can unveil soon. Here are some of my cards in the Mars Attacks Heritage series just released by Topps. 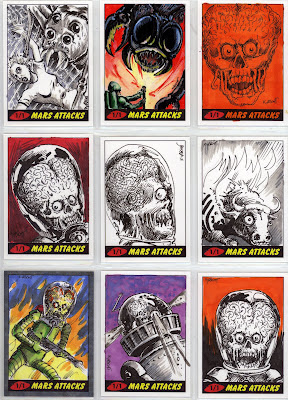 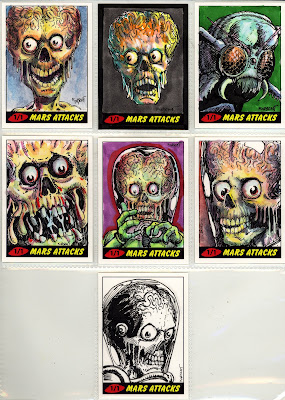 Posted by Shiverbones at 8:59 PM No comments:

I have randomly inserted sketch cards in the brand new trading car set "Cereal Killers Series 2" produced by Wax Eye. here is a sample of some of my cards. I was VERY Excited to be able to draw Barlow from Salem's Lot several times, as he was about the scariest thing I saw as a child. 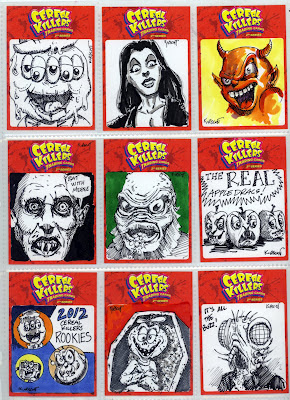 Posted by Shiverbones at 10:02 AM No comments:

Come And Get It!

I just finished the newest Limited Edition Postcard, "Come And Get It". This is limited to 28 copies and is available in a dark border for #1-9, and Orange for #10-28. They have the option of either having a sketch on the back, or being embossed & gilded. I will be placing them on ebay later today. 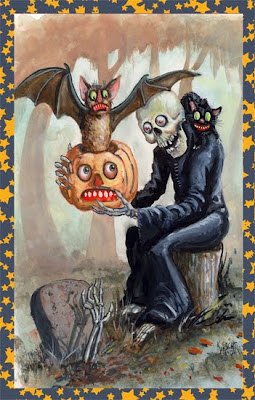 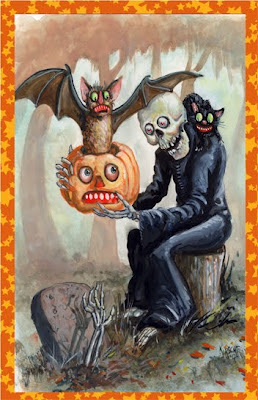 Nearly 5 months since I have posted anything new here, I had not realized that so much time has passed. Most of that was spent working on Wacky Packages & Mars Attacks cards for Topps. As I got ready to begin working on Halloween art and backed up commissions again, My trusty Mac bit the dust. Thankfully I had uploaded all my files to a cloudy place, so none of my work was lost. I am in the process of downloading all couple hundred gigs of files so I can be working at full capacity again. The 1st limited edition which will be ready as soon as I can get my Lantern templates back is ... "The Menacing Moon" This is a cardboard Lantern limited to 10 copies. I will include a preview shot of the non lantern side of the piece. 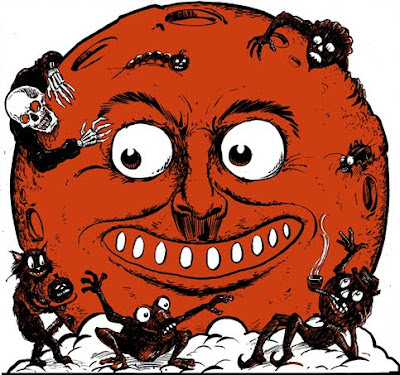 I will be Attending Ghoultide Gathering this year in Chelsea, MI on October 5th & 6th and am beginning to get some work done for that show. I expect to have paintings, sculpture and limited hand made Lanterns and die cuts with me. More on that as it gets closer. I did 6 paintings for the New Wacky Packages sticker set due in stores this July, and will post some images as soon as I get the OK from Topps to do so. I also worked on a number of sketch cards for that series, as well as sketch cards for the upcoming Mars Attacks Heritage series also due out in July. Sketch cards I did will also appear in the Cereal Killers series 2 by Wax-eye set due out this summer. Finally, I have gotten another postcard sized painting done and listed on ebay titled "Tug Of War" 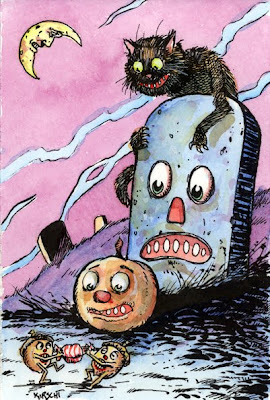 Posted by Shiverbones at 4:21 PM 3 comments: 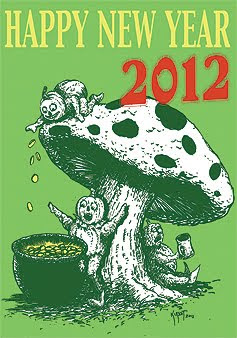 I just finished up this years 2012 ACEO, at least it is still January for a few days. 27 copies have been made in total. This is similar in theme to 2009 & 2010 and is free while supplies last, just send me your address.
Posted by Shiverbones at 4:23 PM 1 comment:

I have finally been able to paint a new image for the next Limited Halloween postcard which I have titled "Effigy". The original is on sale now on ebay, I will have the limited version up on my bigcartel store on Monday. 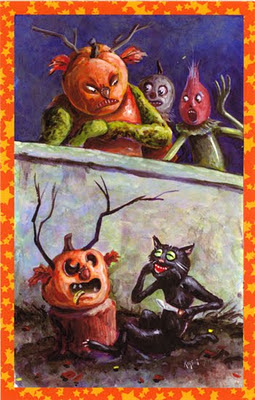 Posted by Shiverbones at 3:28 PM No comments:

Getting back into the swing of things

Happy New Year to All! I went on a bit of a hiatus for a few months, but am back to creating things and looking forward to being able to have some new things to post. Here is a painting christmas card commission I finished in December. 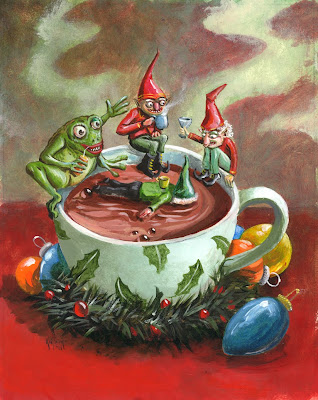 I called this one "Holiday Cheer"
Posted by Shiverbones at 1:46 PM 2 comments: